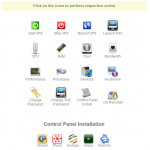 II. All VPS accounts go through a fraud verification process. We set up the VPS in about two to three hours from the time of the account being verified as genuine. The setup process involves automation as well as manual work. This is done in order to ensure that each VPS is setup exactly as per the customer’s order without any errors.

III. While customers do have an option of signing up for a plain VPS (without control panel), we generally recommend a control panel to manage and operate the VPS. All customers who have a plain VPS would have to configure the DNS, user accounts, mail accounts and other such activities pertaining to the configuration of such VPS’ themselves. The support team will not be responsible for this.

IV. Migration of data is done from the old vps (with your previous hosting provider) to the new vps (bought from us) only if the previous VPS has CPanel or Plesk on it. For all VPS, without a control panel, the support team will only move the website files. All the other databases, emails and any other data will have to be moved by the user.

V. Delegation of IP Whois is not done for small blocks of two, three or four IP’s. A customer, if he so wishes would have to buy a full /24 subnet after which IP Whois delegation can be done.

VII. If a customer wishes to switch from a Linux based VPS to a windows VPS, we only move website files. All the other files & data have to be moved by the customer.

USAGE:
I. A Linux VPS has two kinds of memory.
-> Guaranteed RAM – This is the amount of memory that is allocated for your VPS. This is dedicated (reserved) for your VPS and will be available at all times.

II. A Windows VPS get “Guaranteed RAM” and “Equal Share Of CPU”.
-> Equal CPU Share – The VPS gets to share any available CPU over and above their allocated CPU resources, if available. However, the share depends on the plan you are on.

III .A VPS is a virtual partition. As the term itself suggests, it’s an artificial partition created on a BIG hardware node. This means that physical accessories like sound cards, video cards, speakers, monitors etc cannot be attached to it.

IV. While a VPS is a cheaper option compared to a dedicated server, it can never replace a dedicated server in itself. A VPS is not recommended to be used as game-servers or intensive streaming servers. This will be a major performance hindrance. Heavily resource intensive programs & applications including Java (JDK), Tomcat & other such heavy applications are best used on the higher VPS plans. We always recommend that these applications should not be used together with other programs as the VPS will run out of resources. Generally speaking, any CPU intensive application is not suited for a VPS.

V. If customers feel the need to have more resources on their VPS in terms of disk-space or RAM, they will have to upgrade to the next higher plan. We do not increase these limits as it disturbs the balance and the configuration of the hardware node. The only resource which can be increased or decreased is Bandwidth.

VI. The support team will not be responsible for damages or issues arising from the following such activities; upgrading kernel, OS, running windows updates and external software like firewalls and anti-virus. Service Pack 2 can not be currently installed on a Windows VPS.

VII. Backups are the responsibility of the customer. The VPS support team take a weekly backup of the entire node but the integrity of the backup can not be verified until restoration. This is ONLY used in case something goes wrong on our end with a server node. We can not individually restore a VPS from this backup. These backups will not include any media file which may be stored on the virtual machine, flash files would be the only such data which would be included in the backups. Backing up media files would not be HostingFuze Network’s responsibility.

VIII. Users may send a maximum of 500 emails per hour. If there are mailing lists which are bigger than 500, the user would have to divide it.

IX. If a particular VPS is found to be consistently using the burstable RAM available or exceeding the resource limits, it could be suspended. The support team will send an email to the concerned user in this case.

Exceptions to the 100% uptime SLA on Cloud VPS are :

I. If your VM exceeds hard resource limit and faces any performance issues, or your VM restarts because of insufficient resources.

II. If guest OS restarts internal VM services like httpd, named, cPanel, spamd, mysql, exim then this is because of high resource usage. Control panel updates or any other guest OS issues are also not included in our 100% uptime SLA.

III. If your VM restarts because of installation or use of a third party application/software.

IV. While uploading data on Windows VM, if any virus or malicious scripts is uploaded and subsequently causes issues on your VM.

You are always welcome to configure internal VM services or control panel but you cannot blame our uptime SLA. We can provide VMware logs and your VM resource usage graphs which will explain your resources usage and VM status.

SUPPORT:
I. Technical support is available 24x7x365 through live-chat, trouble tickets & telephone. However, only very basic issues can be addressed over the phone.

II. Live-Support is available at all times for any / every issue that a customer may have. However, the VPS team may request an email sent as part of the authentication process, where they deem it to be necessary.

III. All trouble tickets raised and emails sent will be responded to within an hour. If there is a need for further investigation, the customer will be informed accordingly.
In case of abuse or cyber attacks, we allow access to servers to eliminate the cause! Following this decision, you agree to continue purchasing a vps server from us.

IV. For issues which have to be forwarded to SW-Soft, cPanel or any provider of the software and applications which HostingFuze Network provides, it won’t be possible to estimate a time frame of resolution. It completely depends on the severity of the issue and the response time of the provider. Customers will receive updates on these issues.

V. While HostingFuze Network does have a community forum where customers can express their views, you will have to raise tickets or approach live support for the technical staff to attend to your problems. This is the fastest way of getting the attention of the support team. We regard the forum to be a channel which facilitates discussion, exchange of views and ideas. It is not designed to be a support board.

HostingFuze Network reserves the right to modify / change the rules and guidelines at all times.

This website uses cookies to improve your experience while you navigate through the website. Out of these, the cookies that are categorized as necessary are stored on your browser as they are essential for the working of basic functionalities of the website. We also use third-party cookies that help us analyze and understand how you use this website. These cookies will be stored in your browser only with your consent. You also have the option to opt-out of these cookies. But opting out of some of these cookies may affect your browsing experience.
Necessary Always Enabled
Necessary cookies are absolutely essential for the website to function properly. This category only includes cookies that ensures basic functionalities and security features of the website. These cookies do not store any personal information.
Non-necessary
Any cookies that may not be particularly necessary for the website to function and is used specifically to collect user personal data via analytics, ads, other embedded contents are termed as non-necessary cookies. It is mandatory to procure user consent prior to running these cookies on your website.
SAVE & ACCEPT